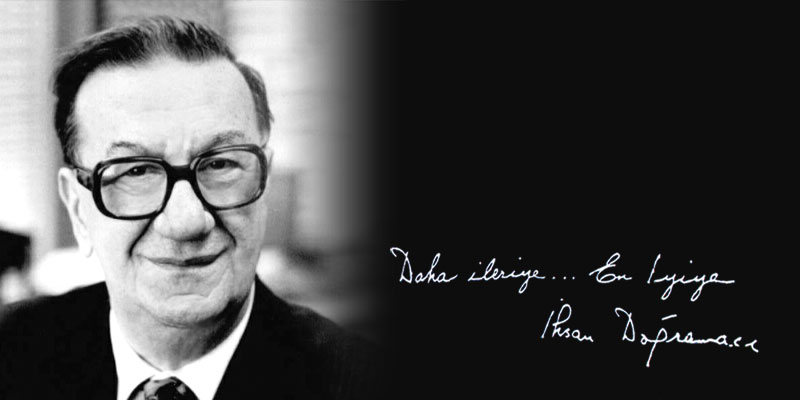 Professor İhsan Doğramacı was in 1915 in Erbil, northern Iraq, which was then part of the Ottoman Empire. As the son of an influential Turkmen family, his background was intimately linked to the history and heritage of the Empire. His father, Ali Pasha Doğramacı, was mayor of Erbil, and his mother was the daughter of a representative in the Ottoman parliament.

In 1942 he married Ayser Süleyman. Her family included a grand vizier of the Empire and a field marshal in the Ottoman Army. Her father, Hikmet Süleyman, served as prime minister of Iraq in the 1930s. Ayser and İhsan Doğramacı had three children, Şermin, Ali and Osman.

This family heritage always remained central to İhsan Doğramacı life. However, his career took him far from Erbil and from the traditional pursuits of a wealthy landholder.

After completing Turkish primary school in Erbil, he graduated from the Preparatory School of the American University of Beirut and the Faculty of Medicine of İstanbul University. He trained in pediatrics in Ankara, Turkey, under Professor Albert Eckstein, and in the United States at Harvard University and Washington University in St. Louis. He and his family then settled in Ankara in 1947.

The young pediatrician rapidly advanced in the University of Ankara Faculty of Medicine, becoming professor of pediatrics in 1955. Even in those early years he was already envisioning the creation in Turkey of nonprofit private institutions of higher learning resembling those he had seen and worked at in the United States.

In 1955, in an impoverished area of Ankara, he established the Institute of Child Health attached to the University of Ankara, and by 1961 the Institute included Turkey’s first university-level schools of nursing, nutrition and dietetics, physical therapy and rehabilitation, and medical technology. He then proceeded to establish the Hacettepe Faculty of Medicine and Health Sciences, which was a second faculty of medicine within the University of Ankara, and a school of dentistry.

Professor Doğramacı became rector of the University of Ankara in 1963 for a two-year term, followed by two years as president of the Board of Trustees of Middle East Technical University in Ankara. In 1967 the Hacettepe Faculty of Medicine and the other schools under the Institute of Child Health were chartered as a new university, Hacettepe University, today one of the leading institutions of higher education in Turkey. Professor Doğramacı served as its rector until 1975. When his term finished, he accepted an appointment as visiting professor of pediatrics at the University of Paris Descartes.

In 1980 the Turkish government invited Professor Doğramacı to advice on the drafting of a new law governing higher education in the country. His recommendations for restructuring Turkey’s higher education system included establishing a Council of Higher Education, with its president reporting directly to the president of the Republic. He was appointed to head the Council and served 12 years, until 1992.

Subsequent to this restructuring, major advances took place within Turkish higher education. In 1980 only 6.3 percent of the university-age population in Turkey was enrolled in institutions of higher learning. At that time the rate in Western Europe was 32 percent, in Greece and Bulgaria 22 percent, and in neighboring Syria 14 percent. In the following 25 years the ratio in Turkey increased to 38.2 percent. In terms of research as reflected in the number of publications in scientific journals, Turkey’s ranking rose from 45th to 18th among the world’s nations during the same time period.

In 1982 an amendment to Turkey’s Constitution allowed for the creation of nonprofit institutions of higher education by foundations. In 1984 Professor Doğramacı established the first of these, Bilkent University, and became president of its Board of Trustees, a position he continued to hold throughout his lifetime. Eight years later the second and third foundation universities opened. Today, of the 139 universities in Turkey, 94 were established by the state and 45 by foundations.

Professor Doğramacı would eventually establish a total of five philanthropic foundations in Turkey, which in turn gave rise to hospitals and educational institutions, including Bilkent. Another of his foundations, the İhsan Doğramacı Family Health Foundation, was created for the benefit of the world Health Organization. It has been awarding a prize regularly since 1983 to individuals who have given distinguished service in the field of family health.

İhsan Doğramacı was active in the fields of medicine and education not only in Turkey, but internationally as well throughout his long lifetime. A true citizen of the world, he was fluent in Arabic, English, French and German in addition to his native Turkish.

As early as 1946, while still a research fellow in pediatrics at Washington University in the United States, he had the historic opportunity to be a signatory to the Constitution of the World Health Organization. Following his return to Turkey, the WHO asked him to visit and advice on the establishment of new schools of medicine and health sciences at the University of Sherbrooke in Quebec, Canada; at the University of Brasilia, in the new capital of Brazil in South America; and in Ife, Nigeria, and Yaoundé, Cameroon, in Africa. He traveled to each of those locations and offered guidance regarding the setup and development of educational health centers that included medical schools and facilities for training other health personnel.

He headed the Turkish delegation to the World Health Assembly (WHO’s decision making body) for six years and served as chair of the European Region countries and as vice chairman of the Assembly in 1976.

Over the years, Professor İhsan Doğramacı was a member of the WHO Executive Board and also served on  the organization’s Global Advisory Committee on Medical Research, Expert Advisory Panel on Health Manpower, Consultative Group on Maternal and Young Child Nutrition, and Programme Advisory Committee in Maternal and Child Health. WHO recognized his contributions by awarding him the Léon Bernard Foundation Prize in 1981 and the Health-for-All Gold Medal in 1997.

Professor İhsan Doğramacı was also active in UNICEF, serving on its Executive Board for several decades. He was elected chairman of the organization’s Programme Committee for three terms and Chairman of the Executive Board for two. In 1995 UNICEF honored him with the Maurice Pate Award. In Turkey, he served as president of the National Committee for UNICEF from 1958 to 2003, and after that as honorary president. In his own specialty, child health, Professor İhsan Doğramacı was chosen as president of the International Pediatric Association in 1968. He would lead the IPA for a quarter of a century, in turn as president and executive director. From 1992 on, he held the position of honorary president.

While serving as chairman of the Executive Board of UNICEF, Professor İhsan Doğramacı became a member of the Advisory Board of the International Children’s Center in Paris, and he continued as a Board member from 1970 to 1984. When the ICC in Paris was dissolved in 1999 after 50 years of existence, he reestablished it in Ankara, serving as its president from 1999 to 2006, and thereafter as honorary president.

He was author of a large number of scientific articles, chapters and books, mostly dealing with medicine and the health sciences. Five books have been written about his life and accomplishments and published in various countries, in seven languages. Although Professor İhsan Doğramacı was offered the post of minister of foreign affairs and also proposed as prime minister of Turkey, he declined on both occasions in order to concentrate on his work in health and education.

Professor İhsan Doğramacı received numerous awards, medals and decorations. He held honorary doctorates from 26 universities in 14 countries, including the United States, the United Kingdom, France, Finland, Italy, Japan and Egypt. He was a member of national academies in Germany, France, India, the United States and Azerbaijan, and an honorary member of 23 national pediatric societies across the globe. The heads of state of Turkey, Azerbaijan, Iran, the Dominican Republic, Finland, Poland, Estonia and France honored him with the highest decorations of their respective nations. The parliament of Egypt and the Grand National Assembly of Turkey, as well as other governmental agencies, also gave him their highest awards and medals. In 1998 the Council of Europe, at a ceremony in Vienna, conferred on him its Prize for Peace, Justice and Tolerance.

Encompassing nearly a century, İhsan Doğramacı life was characterized by a deep and enduring interest in the needs of young people, whether children in the pediatric wards of hospitals or students in universities. His goals in these areas were both national and global. His commitment to improve health care and education in his homeland, Turkey, was always paralleled by a broader vision which rested on a pragmatic and humanistic understanding of transnational interdependence. Although the circumstances into which he was born and the times in which he lived played a part in the enormous success he achieved, his impact upon Turkey and throughout the world derived ultimately from his focus on a set of ideas and ideals and a personal strength of will that drove him ever forward to achieve what he saw as necessary and beneficial.